We arrived around 6:00 in Sao Paulo after 11 hours of pleasant flight with Lufthansa. Everything was all right there; we had dinner and early breakfast. The only disturbance was when we were flying over the equator there was slight turbulence which woke everybody up, it was a bit scary but it passed very fast.

After waiting around half an hour at the passport control we entered Brazil with no problems, took the bus from the airport and went to the Metro for going to the Central Bus Terminal, one of the biggest in the world. Surprisingly there were thousands people waiting for the metro so we were not able to get on the metro so we decided to take the train for the other direction and to make sure we are in the train when it goes the other way round.

Three hours after landing in South America we managed to get to the bus for Rio de Janeiro. After six hours of going down from altitude of 660 meters we arrived in Rio. The weather was great and promising for the entire period of our stay here. There were a lot of mosquitoes but the locals say the dengue fever is gone.

We woke up at 6:40 local time because the time change makes us a bit confused but it was nice. We had a very nice pineapple and bananas for breakfast. Now we go for sightseeing and hope to "meet" Jesus Christ at Corcovado Mountain today.

After the first day of enjoying around here we went to see the Jesus Christ statue on the Corcovado Mountain. As we spent half day on beach having some drinks and drinking coconuts and caipirinha, we went to the Corcovado mountain in the afternoon. I was good trip because there is a special tram which goes up the hill and brings you to the top of the mountain where the famous statue of Jesus is located.

My expectations were greater than the reality brought us. I thought it is a huge monument but it is not. This story happened once again and it was similar to what my expectations were in Paris when visited the Louvre, seeing Mona Lisa picture.

Next day we were planning to go to Maracana stadium and the city centre and we did so but unfortunately entering in the stadium was not possible because the electricity was gone and the stadium was closed. Anyway we had enough time to see it around, took some brake and went to the center for a walk. In the afternoon we spent 2 hour on Ipanema beach, took a caipirinha for the end of the day and walked to the Lagoon. Just before we came back to the hostel we found very nice market where we bought some gifts.

We had a lazy morning with a late wake-up. Around 10 o'clock we went to the Sugar Loaf and there we had some good moments, especially when we were approached by some small monkeys. We enjoyed the views and took some pictures but unfortunately the weather was a bit unclear and we didn't have good visibility.

After going down from the rock we went to buy our tickets to Foz do Iguacu. The trip will take around 23 h and it is 1477 km away from Rio de Janeiro.

After we went to the Copacabana beach, had some time there and came back to the hostel where by accident we met Eva and Ann-Karin from Sweden. They just arrived in Rio and came to our hostel - we are living in such a small world indeed.

We went out for a drink at the beach and a short walk. We went also to the market for some souvenirs as well.

After 24 hours trip from Rio de Janeiro and crossing around 1500 km we finally arrived to the place called Foz do Iguaçu - area where the Brazilian, Argentinean and Paraguayan borders are meeting at one spot. After some time for orientation we managed to find our way to the hostel Natura - place in a land, far away from the city. Lying in the fields - silent and peaceful. The owner met us with his minibus, took us to or rooms and gave us some hints for our stay. We left our stuff and took the way to the Brazilian part of the Iguaçu falls.

It was very easy to access them from our place as we had to take only one bus to there. There are no words to explain the falls so the pictures which will be online soon will say enough. In general it was not that exciting as we expected but it was good to go there. We saw some coatis - a small mammal coming from the family of raccoons. They were so close to the people and even a bit disturbing. One of them approached a small kid and took his cola away and when it spilled on the ground, the coati went there and started to lick it. We also saw toucans and other interesting birds.

After the day of waterfalls we came back to our hostel and the owner prepared very nice dinner - Japanese dish and local desert. It was the first cooked food we eat after our arrival in Brazil. We took some extra after the first dish was over. At dinner we had American man and woman who by accident happened to live in the region of Lake Tahoe in California. And even the woman said she worked at the place were I used to work for three months in 2001. There was also a family from UK. All in all after having some conversations we became to speak about politics and how stupid is Bush, etc.

Our second day at Foz do Iguaçu was even better and more exciting. We had early wake up and moving to the other hostel Paudimar. We left our backpack there, had a fast breakfast and took the tour to the Argentinean part of the falls. In the minibus we were with a retired woman from Canada and two girls from Denmark. Going to the Argentinean part was very easy, the border control just stamped our passports and we arrived at 9:40 at the entrance gate.

We went through the trails, first the upper, later the lower one, took a boa to an island which brings us closer to the falls, and we met even a guy from Peru who had a girlfriend from Bulgaria. It was a time for lunch, so we went to a place which was offered to us by the local guards. It was a buffet with lots of different dishes but nothing spectacular, just typical international dishes. We had a lot of all and some more desert.

After that as I eat very slow we had only two hours left, so we had to rush to catch the train to the Devil's throat and then go back to the Maccuco trail. The first spot was honestly said, breathe taking, so great spot to observe how the water falls down into nowhere.

The last trail was very spooky... The leaflets say there might be dangerous species going around. So be careful and take care of yourself... :-) As we went there after the working time of the trail was over there were no people. It was silent and even scarier. What we saw was a big ant, size like one euro coin and... Small crocodile staying in the middle of the trail...

We were happy that we saw it and all in all the day was awesome...

Now we go for dinner in the hostel and sleep as we plan to "invade" Paraguay before we head to Sao Paulo with the bus at 18:00 h... 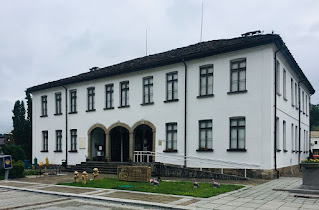